Francis Brennan: Fred Astaire suit got me into the hotel business

Francis Brennan has revealed how a desire to dress up pushed him to enter the hotel business.

Brennan may be a household name and owner of the five-star Park Hotel in Kenmare, Co Kerry, but said he entered the hospitality industry for unusual reasons.

He revealed: “I always knew that I wanted to be in the hotel business. Back in 1963 or 1964 mum and dad were inquiring about borrowing money from the bank to buy a guest house in Sligo.

“My father had been married in 1951 and he had worn a tailed coat, the type that Fred Astaire wore.

“He had it in the wardrobe and I used to dress up in it and think that it looked nice. So when mum and dad were looking at this guest house situation, I was thinking, ‘Oh, I could get wear out of this tailed coat and walk around the hall looking very important.’

“I never got to wear it because the bank wouldn’t lend them the money so my father stayed put as a grocer in Stepaside. That was it though and the seed was planted, so since the age of 10 or 11 I have wanted to work in the hotel business. The style was very important.”

Brennan shot to fame seven years ago alongside brother John on RTE’s At Your Service, where they tried to turn the fortunes of flagging businesses around. He said he could now also be appearing on American TV with a wedding-themed slot.

Speaking on The Anton Savage Show on Today FM, he also ruled out retirement.

He said: “I couldn’t stay at home, what would I do at home?

“At 54 I was given a new career, isn’t that wonderful? Before that I hadn’t done any telly. It’s exciting.”

The Dubliner also spoke about his stint as a Rose of Tralee judge in the 1980s but said he would never return to the role.

He revealed: “It’s a lot of work, the commitment was colossal.

“Everybody thinks that Daithi [O Se] is the man that picks the Rose of Tralee but there’s a whole committee behind that and it’s a week-long picking process.”

Article by the Irish Mirror and written by Kathy Armstrong 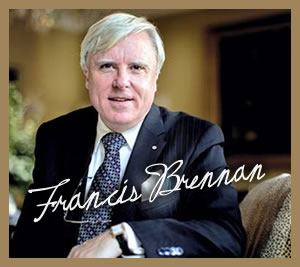 Life is for Living

The essence of good hotel keeping is hospitality and Francis Brennan has practised this with distinction for decades. Owning the Park Hotel Kenmare the hotel has become one of the most acclaimed hotels in Ireland regularly reaching the top of international polls. The Park Hotel Kenmare is an elegant 19th century mansion lapped by the waters of Kenmare Bay. The Park Hotel Kenmare retains all the intimacy of a cherished home. In summer sea breezes waft through the hotel, while peat fires blaze in the hearth all year as a welcoming beacon to guests.
Read More

This website uses cookies to improve your experience while you navigate through the website. Out of these, the cookies that are categorized as necessary are stored on your browser as they are essential for the working of basic functionalities of the website. We also use third-party cookies that help us analyze and understand how you use this website. These cookies will be stored in your browser only with your consent. You also have the option to opt-out of these cookies. But opting out of some of these cookies may affect your browsing experience.
Necessary Always Enabled
Necessary cookies are absolutely essential for the website to function properly. This category only includes cookies that ensures basic functionalities and security features of the website. These cookies do not store any personal information.
Non-necessary
Any cookies that may not be particularly necessary for the website to function and is used specifically to collect user personal data via analytics, ads, other embedded contents are termed as non-necessary cookies. It is mandatory to procure user consent prior to running these cookies on your website.
SAVE & ACCEPT
Go to Top